THE SECOND UPDATE: If you have previously read this post, the further update is in the adding of the cast photo which is below the next one, and it validates what I discuss in the rest of this post.
We have all ready reviewed the second trailer for Fantastic Beasts 2, however, particularly interesting information has been circulating about the character of Queenie (pictured above) and I thought it worthwhile to take a closer look because of the way this could be setting up an important social issue in the film. I owe it to Fetony (his video is here, at about 1:00) for pointing out that Queenie wears an engagement ring (well, it's a ring, we don't actually know that it's an engagement ring yet) under her hair (please see detailed image below). As Fetony was talking about the ring, however, I noticed something for the first time which has escaped my previous viewing of the trailer,... something which I believe confirms that Queenie will at least be courted by Grindelwald to help him and, may possibly be working with him for a little while.
There is some thin, long, black thing coming out of coat pocket sleeve and going towards/actually touching her mouth. We know that "black" always symbolizes death, but there is "good death" (when a person dies to things of the world in order to be alive to the virtues of the spirit) and there is "bad death" (when a person dies to the virtues and life of the soul and instead lives for things of the world); we also know that hands symbolize a person's honor (more on this in a moment) and arms symbolize a person's (moral, ethical) strength (we've discussed this regarding why Dumbledore has one sleeve rolled up and one sleeve down when he's looking into the mirror of Erised).
We can say that Grindelwald symbolizes "bad death," not only because of the views he's preaching in this trailer, but also because, in Fantastic Beasts and Where To Find Them, Grindelwald was disguised as Mr. Graves (Colin Farrell) and nothing says "bad death" like "graves" (because the body goes to the grave if it doesn't have an eternal destination, and a person living for worldly pursuits will not have pursued the things of heaven).
So, what is that thing coming out of Queenie's sleeve?
Well, I have no idea. BUT, the very fact that it doesn't have an identity means it's evil. When someone is good--or at least not rotten to the core--they have an identity. Consider, for example, Tom Riddle: before he started killing off people, he looked normal, he had an identity; has he gave himself over more and more to "Dark Magic," he lost his identity and started becoming a snake (the nose of a person, for example, symbolizes how important their character is to that person, and that his nose turned into slits mirroring those of a snake, it reveals that Tom Riddle had no concern for personal honor whatsoever). Consider also Credence's obscurial: it's black and shapeless and wrecks only destruction; it's possible that the thing coming out of Queenie's sleeve is connected to Credence and his power (it's coming out of Queenie's left sleeve, and we see Credence sending out his black "power" from his left hand). So, the "identity-less-ness" of the thing coming out of Queenie's sleeve points to it having something to do with death, possibly/likely Grindelwald directly or indirectly. Notice, also, it's moving towards her mouth,...
The mouth, we know, symbolizes our appetites, and we know that Queenie and Jacob both have appetites: that he bakes and she cooks is one of the first pieces of information they exchange about each other when they first meet. But there is also the appetite for love, which we all share, but as rumors are going around and developing, the general theory is that it's the forbidding of her romance with Jacob (she's a witch and he's a muggle so they are not allowed to get married) that Grindelwald will use as leverage to get Queenie to help him.
The minor problem--which just makes it that much more interesting--is Queenie can read minds, so she would have to know that Grindelwald is manipulating her and, because of Grindelwald's view that muggles are worthless, she has to know he's lying. However, if this is going to develop in the film, I wouldn't be at all surprised to Queenie closing her eyes to the truth, that is, she knows Grindelwald is lying but she sees her situation as desperate (remember, at the end of Fantastic Beasts, she appears to be breaking the law to visit Jacob in his bakery, so they established that Queenie isn't a goody-two-shoes who will put "the greater good" above her own desires, but would be willing to put what she wants first).
Eat Your Art Out,
The Fine Art Diner
P.S.--There were some additional notes I included in the caption to the image below regarding the symbolism of Dumbledore's clothing, so please check that out as well.
P.S.S.--BELOW THE IMAGE OF DUMBLEDORE IS ANOTHER IMAGE OF QUEENIE.

This is an image someone gave me demonstrating that the black thing coming out of Queenie's sleeve is her dress sleeve. Ok, this is likely, I concede this, but I stand by my interpretation that this is a sign that she is going to do something "dark" in line with her appetites because this is not a typical sleeve (most sleeves stop about the wrist) and it's highly unusual for a sleeve to "creep out" of the coat in this way and touch the mouth. Because it's part of the sleeve, it's coming from the arm, so Queenie's lack of honor (she leaves work whenever she wants, she has a man stay in her apartment over night, she visits Jacob in his bakery) is going to feed her appetites (touching her mouth) so she can get what she thinks she wants. 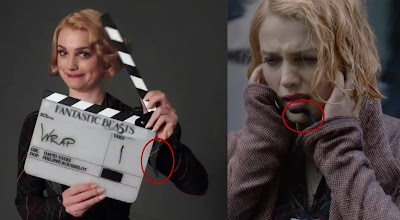