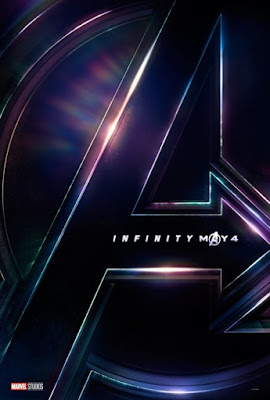 Marvel has released the first, official trailer for Infinity War which will be released in two parts. I have been trying to get one simple post up all week, and haven't managed, so I might just keep "adding onto" this one as I have the energy: the poster, for example, is surprisingly complex, I just don't have the physical strength to write about it, so here is the trailer:
Several of the Avengers look different: Captain America and Winter Soldier, for example, have aged, while The Vision has turned more "human looking," having lost the Infinity Stone which gave him materialization (actually, I'm not sure "materialization" is the proper existential state to describe Vis, but you know what I mean, when he went from being a digital AI assistant to Tony Stark to being his own "entity") while Thor now has the Odin-eye-patch and Black Widow is blonde (we don't see Hawkeye or Ant Man at all, yet, but rumors suggest Hawkeye has the most dramatic transformation of any of the other Avengers, which will probably be introduced in a separate trailer). Why has Black Widow gone blonde?
The blonde color is close to white, like it's been "bleached," (and I don't mean she's bleached her hair in a literal sense) rather, the red hair--"red" symbolizing the thoughts of love of fellow men, Avenger, country and Banner which provided her motivations for doing what she did--has now been "lost," the red, the love, has faded, due to events which have transpired and she's "dead" in her understanding of why she is still fighting, and for what she's fighting. I will be expanding this post, I just don't have strength to do more at this moment, but please, watch the trailer again, and note your own observations.
Eat Your Art Out,
The Fine Art Diner
Posted by The Fine Art Diner at 11:09:00 AM

I still have not made it to the theater. I am so sorry, I have just been so sick. Please, forgive me. Justice League opens this weekend and is on track to do about a $110 million opening, which will be good if it meets that (even a $100 million opening weekend would be good, considering how Batman vs Superman "under performed" according to expectations). First of all, I think a lot of people watched B vs S on disc and cable and realized they liked it, so they are more open to seeing Justice League in the theater and ignore reviews panning it; however, the reviews seem to be generally positive, which actually scares me. I just have a bad feeling, a really bad feeling, that--given the direction Wonder Woman went--JL is going to be liberal.  I don't know that for sure, it just seems that Warner Brothers has done everything it can to court liberals and craft a liberal persona to the public, and it's certainly working on me. If you go--and I am going to really try myself, again--but if you do, please note that several cities are reporting tickets being sold out for days, so get your tickets now. Secondly, there are two end credit scenes for the film, so stay until the very end. If you don't mind a potential spoiler regarding the way Superman "comes back from the dead," then keep reading; if you would rather not know, then stop now.
Word on the street is, Bruce Wayne (Batman, Ben Affleck) studies Lex Luthor's (Jesse Eisenberg) notes on how he brought back Doomsday (Michael Shannon) to life in B vs S and uses the same technology to resurrect Superman (Henry Cavill). We have seen this before in Iron Man 3, when technology symbolizing socialism emplyed by Guy Pierce's character is used to save Pepper Potts (Gwyneth Paltrow) from her plunge to death, and then again to save Tony Stark (Robert Downey Jr) himself from having to have that think on his chest so he can be normal again. We could even recall the "magic" used in Hansel and Gretel Witch Hunters: what these Iron Man and Hansel and Gretel were definitely saying is, "It's not the technology in and of itself that is bad, rather, how it is being used," and then we can even add the staff of Merlin to this and the last Transformers film. There was also resurrecting Bond in Skyfall; so what am I worried about? The conversion of Superman: that now he's no longer an American icon and hero, he's a liberal ideological mouthpiece. I sincerely hope I am wrong, as always, but I am guessing that there is going to be a smattering of both capitalism (from before Zach Snyder exited) and grated liberalism (when Joss Whedon was brought in to make it a watch-able film). Really, I am going to try and see it this weekend.
Really.
Eat Your Art Out,
The Fine Art Diner
Posted by The Fine Art Diner at 3:57:00 PM

Murder On the Orient Express Trailer #2

Opening this weekend is a film I have greatly anticipated since the release of the first trailer: Kenneth Branagh's Murder On the Orient Express. The Agatha Christie story has been remade successfully numerous times for cinema so we have to ask, why again? The answer is never, ever, that someone thinks, "I can make a better film," rather, it's because this is such a good story, I want to make sure that cinema audiences today get to enjoy it (because few bother to watch films older than 2000, and certainly not films from the 50s, 60s or 70s). So, Branagh believes that something in this murder mystery is applicable to the world we live in today; how are we going to watch this film to deduce what his thesis is? (Don't worry, I'm not giving away any spoilers in this post, I would let you know if I were; the second trailer is at the end of this post if you need to see it again).
To begin, we know the film takes place in the 1930s; why? No, because Agatha Christie set the story in the 1930s is never a legitimate answer because that's a detail which can easily be changed to make something present day; what was happening in the 1930s? The Great Depression and the rise of socialism and fascism across Europe, which is exactly what is happening again today (although, since Trump took office, the economy has finally started booming, but during the Obama "Administration," it looked like the economy was going to completely die). So, we have the same "historical ingredients" in place in America which were historically in place in the 1930s.
What else?
The film begins in Jerusalem, the Holy City, the Old City. Why? There is a "religious nature" to Poirot's mission (Kenneth Branagh). Jerusalem is sacred to Muslims, Jews and Christians, so it's a location which binds and unites us--and trust me, "united" is the last thing anyone can say about the United States today.From Jerusalem, Poirot travels to Istanbul,... and now we have an interesting detail: at least three films that I can think of from the past couple of years have featured Istanbul, specifically The Blue Mosque which was featured in Taken 2, Skyfall and Argo. In both Taken 2 and Skyfall, the white heterosexual men are seen pursuing the enemies with courage and determination; in Ben Affleck's Argo, his Canadian hero (socialism) is seen sneaking around, terrified and impotent. We'll see how Poirot makes out when he's in Istanbul (which used to be Constantinople). Lastly, pay attention to class dynamics: which social/economic class is each character from, and how do they interact with other characters from different classes? I plan on seeing Murder On the Orient Express Friday afternoon, and will do my very best to get a post up this weekend,.... really, my very best.
Eat Your Art Out,
The Fine Art Diner

A Blessed All Saints Day To You

Dear Readers,
As always, I can't begin to thank you sufficiently for your continued presence at The Fine Art Diner. I have every intention of returning to posting regularly, however, I am still quite sick. Thor: Ragnarok opens this weekend, it's expected to do quite well, and while I am looking forward to it, I simply don't know if I will be able to make it or not. In case you want some prepared material going in, here is our analysis of the Thor trailers, especially featuring Darryl, Thor's Australian roommate. In the meantime, just about every major film coming out has released a trailer, and I simply don't have the energy and focus necessary to post them. Here is one (obviously pro-socialist) but it's likely you have seen the others, but this has some interesting features.
If you remember The Woman In Black, you are seeing "echoes" of the film: the way Helen Mirren's Sarah walks and dresses, sits in an abandoned room, etc. There are also the echoes of The Conjuring: the face of a ghost behind the mirror when it's turned, for example (I know this post isn't up to par and what you expect, I am sorry, I am trying). Anyway, the most important aspect is this note: Sarah believes she is cursed by every single person ever killed by a Winchester rifle. She was fantastically wealthy, making approximately $25,000 a day in today's economy, adding to the nearly $500,000,000 fortune her husband left her. So, we have gun rights and gun control being targeted (hauntings by the victims) and a "lunatic" who is the 1% of the 1%. So, I am trying to get well as quickly as possible, and I thank you with all my heart for your continued presence here in spite of my absence. Just because I haven't posted on Annabelle, The Dark Tower (which is now out on video, excellent, I loved it!!!), IT and Blade Runner: 2049 doesn't mean I don't want to. I hope to get caught up on those films, as they are highly important and will have impacts on future films coming out. So, a happy and blessed All Saints' Day to you and your beloved, and I will do my best to see Thor this weekend!
Eat Your Art Out,
The Fine Art Diner
Posted by The Fine Art Diner at 1:27:00 AM