TRAILERS: The Shape Of Water #2, Murder On the Orient Express #2 & Blade Runner 2049 Short No Where To Run

I have been so sick.
I am still sick, but at least trying to get something up to let you know I am still alive and will be posting as soon as my brain gets its space in my head back from all the congestion.  Two awesome trailers have been released, the second for Murder On the Orient Express and the second, red-band trailer for The Shape Of Water.
At about 0:31, we see a rather remarkable shot: the train has completely stopped on a bridge. Why? Bridges, like hallways in a house or building, symbolize a "crossing over," a transition to a new state of mind, being or belief (etc.; just because the trailer makes it look like the train stops at the time of the murder, we shouldn't deduce that automatically; the film may have the train stopping on the bridge for a very different reason). The bridge is incredibly high in the air and even looks like the very last car might be about to fall off (if you look closely, it looks a bit crooked). So a transition takes place, and part of the train (the vehicle of the film) is going to be lost in this transition,.... or saved, depending upon the action of the characters. I'm not in any shape at all to go in-depth into anything, so let's go onto The Shape Of Water:
Oh, I can't wait.
Unfortunately, not every trailer makes me so happy. Here is the first trailer for the re-boot of Tomb Raider with Alicia Vikander, and it's devastating.
"A tomb called Mother Of Death."
"If Trinity succeeds, our world is in danger."
"Close the tomb once and for all. The fate of humanity is now in your hands." Okay, so "Trinity" refers to The Trinity--Father, Son and Spirit--and the necessity of closing the tomb is the Tomb of the Resurrection, the Tomb of Jesus wherein He rose from the dead, and in which Christians around the world believe because we, too, shall rise from the grave, as the Church (Mother of Death) teaches, not like the socialists teach (you are animals and when you die, you die, there is nothing after that). So,.... yea, rather disgusting. But, here to save the day is another Blade Runner 2049 short which I promise we shall delve into quite deeply, but it's like a fine wine, it deserves time for us to linger over it in thought:
The Power and the Glory,... I'm not a fan of Graham Greene, however, The Fugitive of 1947, starring Henry Fonda and Dolores Del Rio is an official adaptation of the novel and probably my favorite Henry Fonda film of all time. At this point, I'm confident (but we all know that I have made mistakes before) that Dave Bautista's character is a replicant (we see his "form" in Niander Wallace's museum on display) so that he's a replicant introduces a whole host of problems: if he's a machine, why is he feeling so much stress? Stress comes from the emotions, why would Niander program replicants to have stressful emotions,.... or did he? Bathroom scenes are always interesting (where the short opens) and when we see Bautista's character look in the mirror, then put on his glasses, then look back into a mirror obviously dirty, scratched and dark, signifies "double reflection" (his eyeglasses and the mirror both symbolize reflection, so he's "doubly reflecting" on what's happening to him, which may be causing him his stress). It's not just the title of the book which he gives to Hannah that ties Bautista's character to the religious dimension, but Hannah herself: in Scriptures, Hannah is the mother of the prophet Samuel, which means "Heard by God," because God heard Hannah's prayer for a son so the shame of being barren would be taken away from her. So, what do you think? I am desperately trying to get well. Thank you, as always, for continuing to stop by and check to see if there is a new post.
Eat Your Art Out,
The Fine Art Diner
Posted by The Fine Art Diner at 12:27:00 AM 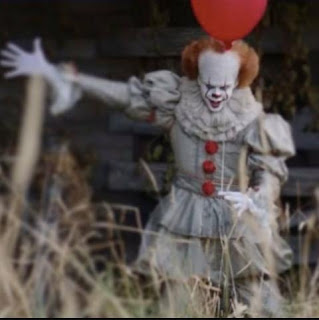 Without a doubt, IT is definitely pro-socialist, but it's also re-writing significant historical facts; we shouldn't be surprised, Liberals must re-write history, but what's so perverse--and I do mean twisted and turned upside-down--about IT is the length to which it's distorting reality and yet collapsing in upon itself. The good news is, however, that The Mummy will be available this Tuesday, hooray! If you haven't seen it, it's a must. There is another piece of good news: The Shape Of Water has won the Golden Lion award, the highest honor given at the Venice Film Festival, and one of the greatest honors in cinema in general (you can watch the trailer and read the analysis of it here). What does this mean? More screens will be showing it, so a greater number of people will get to see it, and del Toro--who wrote and directed it--finally has the laurel wreath he so richly deserves. Such an honor, then, will mean del Toro will get to pick the projects he does, and will have a greater control over (what might be controversial within the industry) his creative direction. I will get IT up asap!
Eat Your Art Out,
The Fine Art Diner
Posted by The Fine Art Diner at 1:28:00 AM