Opening this weekend are several films: Jack Reacher 2, Boo! A Madea Halloween, Ouija Origin of Evil, Keeping Up With the Joneses, American Pastoral and even some more. I am going to go see Ouija Origin of Evil first, and also make it a point to catch Jack Reacher; Ouija will definitely be pro-socialist, and here is why:
Ouija, a very pro-capitalist film, was written and directed by Stiles White, whereas Origin of Evil was done by the same writer/director who did Oculus, Mike Flanagan and both Oculus and Origin of Evil have Annalise Basso in them (the older sister with red hair, Pauline). I COULD BE WRONG, however, the Ouija board game symbolizes two things in Origin of Evil: first, competition: board games, and games of any kind, are made for two or more people to compete against each other and establish a winner (in the case of Ouija, people compete against a real or non-real entity to see if they can get their questions answered) and we all know that socialists hate competition. The second thing the Ouija board symbolizes in Origin Of Evil is business and capitalism: they are using the board game for work, a rather sketchy line of business, to put it mildly. We also know that the father, the head of the family, has died (so the white heterosexual male thing is definitely at work in this film) and the "Father," the priest, is a likely target (it might not be overtly anti-Catholic, because socialists would like Catholics to come on board with their agenda, but the priestly Father is replacing the family father, who symbolizes the economy--we'll discuss this with Logan below--so the Church and capitalism are being linked, which we just saw in the opening scenes of Magnificent 7). But there is something really obvious we need to be looking out for,... 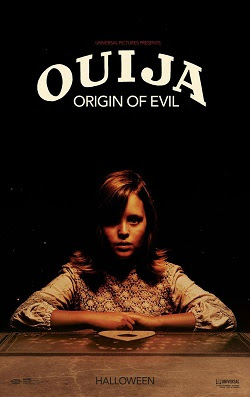 Rebecca Hall stars in director Antonio Campos' third feature film, CHRISTINE, the story of a woman who finds herself caught in the crosshairs of a spiraling personal life and career crisis. Christine, always the smartest person in the room at her local Sarasota, Florida news station, feels like she is destined for bigger things and is relentless in her pursuit of an on-air position in a larger market. As an aspiring newswoman with an eye for nuance and an interest in social justice, she finds herself constantly butting heads with her boss (Tracy Letts), who pushes for juicier stories that will drive up ratings. Plagued by self-doubt and a tumultuous home life, Christine’s diminishing hope begins to rise when an on-air co-worker (Michael C. Hall) initiates a friendship which ultimately becomes yet another unrequited love. Disillusioned as her world continues to close in on her, Christine takes a dark and surprising turn.

Christine didn't seek promotions or to further her career, she sought to improve her personal and romantic life. That's obviously not what the film makers are focusing on, rather, on the "horrible" white male boss who stands in her way and makes her compromise her news stories for the sake of "ratings."  Now, let's look at the second trailer about another woman, Alice, who doesn't let anyone stand in her way:
I hope you picked up on the line, "Kill every last one of them," because we just heard that in John Wick Chapter 2 above as well. What are the differences between Alice and Christine? Christine seems to be blaming others for her problems, and, unlike the Queen of Katwe who uses chess to help her make good decisions, we see Christine basically paralyzed to the point she can't make decisions. With Alice, she is taking everything upon herself: she's going to get justice from the Umbrella organization, and she's going to save humanity. Who was it that first got the virus that spread so the rest of the world? A child. In Underworld: Blood Wars, there is a battle over a child, Selene's daughter:
I just don't know what to make of the Underworld films, even after I have seen them. One problem is the "heroes" are all anti-heroes, and as such, can't be morally identified with; which leads to the problem that, whatever message--good or bad--these film makers want to impart to the audience, is utterly garbled. Let's take a look at one last woman before we move on in this trailer (Owen Wilson is in this, so it's obviously obscene, sorry):
The good thing about this is, in a backwards sort of way, it is supposed to be elevating the dignity of women: whatever you say about a woman, know that is someone's mom,... their sister,... their aunt, their daughter,... and we saw this in Ted 2 during Ted's bachelor party and they are watching bears mating on a documentary and one of the guys says, "Remember, that's someone's daughter," because, even though the female was a bear, it was still a female who had a father and mother, so how much more so dignified are we human women? And now, in this trailer, we are going to see kids who are at rock bottom but only so a greater good can take place:
The interesting thing about films like this is: everything has to all ready be in place before the "change" takes place, in other words, a bad bully isn't suddenly going to become a nice guy who defends the weak; a guy who has always defended others is going to become enhanced to he can do even more: those who can be trusted in small tasks, will be trusted with greater tasks. Virtue that has been exercised becomes its own super-power, even when it doesn't seem like it. Let's pause for a moment and look at the newest Pierce Brosnan film, Urge, and consider the opposite of exercising virtue:
This film is definitely pro-socialist, because it's trying to reveal that you are not your wildest desires, you are, rather, the continual decision NOT to act upon your urges, you are human, not an animal, even though socialists want you to believe that. This next one is going to be a great film:
Not just because we stood (mostly) united in the wake of (another) terrorist attack, but because of the total fearlessness and utter devotion of the men and women in blue, our officers of the law, who are called to lay down their lives at any moment for their country and neighbors. What was a terror attack turned into a day of patriotism. Whatever we are called to do, we must do it to the utmost of our ability, as we see in this last trailer:
There is a great irony to watching films: we go to movies to escape the drudgery of our daily lives, but in the films we watch, we find them in their daily routines, and then something extraordinary happens, and all they want, is to get back to their daily lives and that boring routine that we were escaping in our own lives by going to the movies. "We are linemen. That's what we do," is like hearing Alice in Resident Evil loading her guns and saying, "This is what I do," Whether you are an Alice or a lineman or neither, whatever you have to do is yours, it is your responsibility to do it and do it to the very best of your ability; you probably don't see it, but God does and He knows. Like the Phiona, the Queen of Katwe, whatever it is you do, do for the Lord.
Eat Your Art Out,
The Fine Art Diner
Posted by The Fine Art Diner at 9:30:00 PM

I did go see Deepwater Horizon with Mark Wahlberg and it was excellent. Excellent. From the pure entertainment and quality of the acting, stunts, effects and narrative, it was an excellent film. It also has fabulous applications of theory, especially--hooray!!!--erasure. I just haven't finished it yet. So, here is a teaser for the trailer to be released Saturday for John Wick Chapter 2, which finds our hero being bound to an oath he made to help a fellow assassin take out someone or other in Rome:
With the first poster they released, and the emphasis on the tailoring in this teaser, again, they intentionally want to remind us of The Kingsmen Secret Service; why? We won't know until we get more details, but we are all ready ahead in catching the references. In the freeze frame of the teaser above, we see what looks Wick pointing a gun and a nasty cut across his nose; why? Because the nose is the most prominent feature of our face, and the face is the place of our individual identities, the nose symbolizes our character, so when a character has their nose broken or cut or damaged in some way, it's a reflection on their character; this isn't to say that Wick's character and integrity has suffered--maybe it has--but it likely means that someone has tried to defame his character and make him look bad to others. Numerous trailers have dropped this week, but I am trying to get a real post up; we'll see what I am able to come up with. If you can, get in to see Deepwater Horizon, it was great.
Eat Your Art Out,
The Fine Art Diner
Posted by The Fine Art Diner at 2:07:00 AM