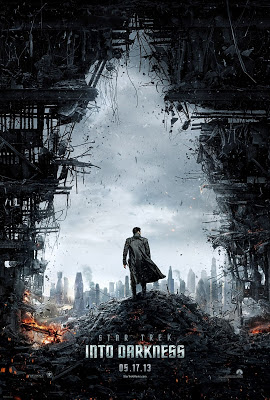 ﻿Out on video this week, Star Trek Into Darkness. If you haven't seen it, why on earth not? The film is absolutely amazing and I couldn't have been more thrilled with director JJ Abrams' creation, making him a perfect choice to direct Star Wars 7. STID was so thoroughly important, we did two posts on it: the primary post on the film was The Enemy Of My Enemy: Star Trek Into Darkness and a complimentary post, Science-Fiction & Westerns: Genre Analysis since so many sci-fi films are being done (like the upcoming Enders Game with Harrison Ford and Thor, instead of more westerns). And, sadly, speaking of sci-fi films, Brad Pitt's World War Z sequel is all ready in development,...  ﻿
Well, this certainly solidifies some details.
Mr. Josh Brolin has verified that, at some point in casting Batman for the upcoming Batman-Superman cross-over film, to be produced (and written?) by Christopher Nolan, directed by 300 and Man Of Steel maker Zack Synder and co-starring Henry Cavill (Clark Kent, Man Of Steel), he was being considered for the role and it has been confirmed that filming will be done in metro Detroit,.... what does that tell you? Ben Affleck, who has secured the role and national disdain for his casting in the iconic role, is (like Mr. Brolin himself) a known and vocal liberal; so that two liberals (Brolin and Affleck) were both being eyed to play billionaire Bruce Wayne (because Wayne Manor comes with the cape) and that Detroit will be the locale makes it look like a very different film from the Christian Bale Batman Trilogy completed with Nolan (what is confusing, however, is that reliable sources reported that Bale was offered $60 million to reprise his role; this doesn't mean the script is written, filming doesn't start until 2014; it's possible that depending on Bale and who they went with will decide plot details of the film; at least, that's my bet at this point).
Why does this matter? Because this is what art does. Artists are those who say what can't be said because the language of art is encoded, so they can use their gifts and talents to create scenarios that reveal ourselves to us, the situations in which we find ourselves--like the state of the country right now--and why, what makes us the way we are, etc. Reader response theory is something we have discussed before; namely, that we are viewers of the film enter the theater with knowledge of the outside world, events and people and other films; we know that Ben Affleck is a liberal , so when we see him playing Batman, that is going to be infused into out understanding of his character, which is probably what Nolan and Synder want us to be thinking about when we see Affleck because of what they are going to do with the character, especially if filming will take place in bankrupt Detroit, rather than New York City or Washington DC. These are angles to consider in this development--not to mention that Nolan's next project, Interstellar, will probably somehow pave the way for Batman-Superman--and I will keep you posted. ﻿
﻿I'm not a big fan of Keanu Reeves, but I am a big fan of Japanese horror films which focuses more on the strange cracks and breaches of our relationships with others, rather than gore and violence. 47 Ronin, due out Christmas Day, is obviously passionately done, and I am a fan of that as well. Just part of my laziness and, yes, I will admit it, snobbery, the trailer has been out for awhile but I haven't watched it until I was forced to this weekend at Riddick and, I confess, I am FINALLY excited about something opening in December other than The Hobbit:
"Those who have enslaved you have taken over our land,"... what does THAT sound like? "The enemy will be watching," does that sound like the NSA to you? "Your life belongs to us," and what does THAT sound like? I might be jumping the gun,... but when the American public has become enslaved to food stamps and unemployment, and a person's life belongs to the state that has seized power after killing the rightful masters (the founding fathers and Constitution), I don't think any of that sounds like capitalism or America as we know it, especially when the guy saying someone else's life belongs to him wears yellow.
Why is yellow important?
﻿﻿﻿﻿﻿﻿﻿﻿﻿﻿﻿Yellow is the color of gold (especially in the scene above with the golden robe the evil Lord wears) and it denotes kingship, because only a king (a monarch) is able to afford gold (because gold is the most valuable substance on earth and gold doesn't tarnish so a king/monarch is not supposed to be able to tarnish either, it's a standard of leadership). On the other hand, cowardice or corruption can also be denoted by gold because a king is supposed to go first into battle to rally his troops, instead of staying behind or ordering others to do what he won't do (say, like with Obama taking credit for killing Osama Bin Laden when he wasn't the one who killed him, the Seals were) or when someone is supposed to be truthful and isn't (the gold has become tar﻿﻿nished), so gold can then be understood as "what should be, but isn't" and only about 10% of the American public still trusts the government right now. I could be wrong about all this, I am sometimes, but this is shaping up to be a good film, so far thus, and I am anxious to see it.  Eat Your Art Out,
The Fine Art Diner
Posted by The Fine Art Diner at 11:09:00 AM