Lincoln & the Masquerade Of History

Section 1. Neither slavery nor involuntary servitude, except as a punishment for crime whereof the party shall have been duly convicted, shall exist within the United States, or any place subject to their jurisdiction.

Now, in today's context, when there is a communist in the White House, and liberals in Hollywood are pushing for socialism (and, again, socialism and capitalism were the two most searched words of 2012) the important words "slavery" and "involuntary servitude" could mean--again, in today's context--any labor(on February 15, 2013, Rush Limbaugh discussed the film--which he didn't like either--and you can read his comments here). Yes, any labor at all. Do you recall a film from last year called The Help? Liberals want the people of the United States to identify with the black maids of The Help--because they are the main characters and an audience always identifies with the main character--and in so doing, we are meant to conjure up our own memories of bad stories, practices and unfair treatment which employers have waged against us; yes, this is called "class warfare," and The Help was the first part of a series of films intended to change the mind of middle-class Americans from capitalism to socialism by making us make ourselves victims and the upper-class/employers criminals; Steven Spielberg's Lincoln follows through with this strategy. Please consider these words below (emphasis added):

It is for us the living, rather, to be dedicated here to the unfinished work which they who fought here have thus far so nobly advanced. It is rather for us to be here dedicated to the great task remaining before us -- that from these honored dead we take increased devotion to that cause for which they gave the last full measure of devotion -- that we here highly resolve that these dead shall not have died in vain -- that this nation, under God, shall have a new birth of freedom -- and that government of the people, by the people, for the people, shall not perish from the earth.
The first text quoted above is from the 13th Amendment to the US Constitution abolishing slavery; the second text is Lincoln's Gettysburg Address. What Spielberg's Lincoln does is remind us that history films are never ever never ever never EVER about history; they are always about the here and the now; art is created, not to reflect upon a people who are dead and a culture that is gone, rather, historical art (such as history films) are used as vehicles to express how something then is similar to what we are going through now an to reflect upon our own situation in the world. In this case, both the Civil War then and America today have had to endure slavery, the question we are arguing in our culture is, are "employees" slaves and are business owners "slave holders?" Spielberg's answer is yes to both.
I never thought I would see such an image from Steven Spielberg, but the film opens (much like the entire story of Django Unchained) with blacks killing whites. This isn't racial tension being expressed, rather, like Timur's Abraham Lincoln Vampire Hunter, Lincoln calls for a violent, French Revolution style of "cleansing the country" and healing it of the "disease of slavery" plaguing us which the black soldiers (anyone who is an employee and not a business owner) purging the ranks of class and wealth (the conversation Lincoln has with one of the black men after the battle is about receiving equal pay, equal benefits, equal voting rights, equal chances of advancement (which is actually the basis of capitalism) but the man asking for equality--even though he is black, is actually a plot because--just as in The Help--we identify with the main characters (black soldiers) and what they are doing--killing white people. Yet that is not the most surprising thing about the story; I rather think the focus is on Lincoln's own personal corruption and his willingness to break the law to get the 13th Amendment passed, among other things; why?
I mean, Spielberg really sets himself up here: Abraham Lincoln, the most popular president in American history, and Spielberg spends all this time showing him breaking the law and being (nearly) a tyrant; well, what do you expect from someone who supports President Obama who has 21 impeachable offenses (before Benghazi) to his first term in office? Spielberg is validating and justifying what Obama has done by demonstrating all the corruption Lincoln took part in, and how the ends justify the means, so as long as Obama thinks he is doing the right thing, Spielberg thinks Obama should be allowed to do it and the heart of that conflict lies in the conflict between state and federal government.
While Spielberg could not have known that so many states would file petitions for secession after Obama's "second win," Spielberg did take note of all the state lawsuits against Obamacare being lodged, and Spielberg sides with Obama: states cause war, but the president has the right and duty to freely interpret the Constitution to find the powers he needs to implement the policies he wants to. I, personally, completely disagree with this, but it's important to see how liberals make these kinds of arguments because a film such as Lincoln mirrors perfectly how the liberal mind works and thinks and how best to attack them. 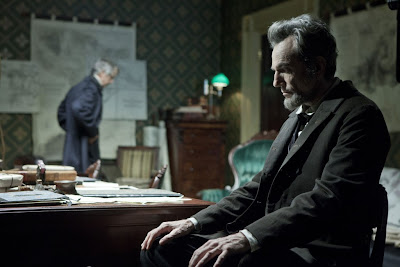 After the first fifteen minutes, I was ready to walk out of the theater (which I have done on only one occasion); I was so sick of Spielberg trying to ram down my throat that Obama (who used Lincoln's Bible at his inauguration) is waging a new war for American freedom from capitalism, a reconstruction of America with total redistribution of the "slave holders'" property (employers and the wealthy), Obama's right to any and all powers he wants, including circumventing Congress (all this is in the film, we see Lincoln doing this) and making all people totally equal in every way, Mr. Spielberg succeeded only in bringing himself down to the level of mediocrity, down from the creative heights all so richly beneftted from; he has ceased to be Spielberg, and is now just a two-bit director, and this is what will happen to all the greats in American society if socialism continues.
Eat Your Art Out,
The Fine Art Diner 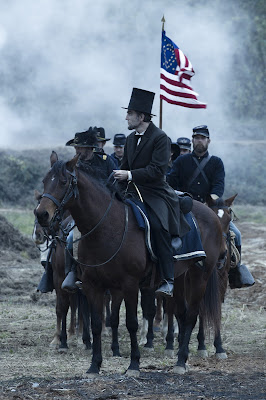