What Does 'Piss Christ' Mean & Why Is It Important?

It is perhaps the most controversial work of art in America.
My mother has gotten upset, as it's been in the news again, and asked me to write about it and its significance, if it has any. Of course it does, and I think it's a very important work of art. I say this as a Christian, someone continuously trying to live up to the teachings and commands of Jesus Christ, because, I have to be honest with you, when I look at Andres Serrano's Piss Christ, I see what I do to the Cross every time I sin.
Serrano takes photographs, so what you see above is what is on display (should you decide to go see it). It is described as being a plastic Crucifix in a jar/bottle of the artist's urine and, by some, as being "the most deplorable, despicable display of vulgarity " produced by an American artist. Why? The initial reaction of people such as my dear mother, is that disrespect is being shown to the Cross and the image of Jesus Christ. It is absolutely possible that Mr. Serrano intended only to create a sensational piece to infuriate Christians, but as Christians, does the piece contain a message which we should be in tune with, and, instead of being controversial, Piss Christ becomes instructional?
The purpose of the Cross, and Christ's Suffering, was to redeem us from our sins, to pay the price that we could not. What is it that transforms the Wood of the Cross (invoking the wood of Noah's Ark which saved the righteous from the flood waters of the world) into the cheap plastic cross of today's culture? When we ourselves cheapen the price Christ paid for our sins, because we, as Christians, know what that price was and, instead of worshipping the Cross, we steep Our Savior in the filth of our sins, again and again. Whereas we have been cleansed of sin through Baptism, "urine"--as an anti-thesis to the symbol of spiritual cleansing--is the willingness we have to wallow in the ways of the world instead of following the narrow path which we profess to believe and hold as True. Piss Christ isn't a work about Jesus, rather, it's a work about Jesus' followers, me and you, and Serrano calls to our mind an important lesson we tend to (easily) forget. 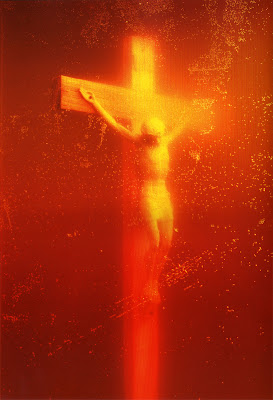 If I chose sin over Christ, then I have "pissed on Christ," and I have transformed the wood of the Cross into the throw-away, cheap plastic of a world condemned by its own appetites and I have knowingly rejected the Path of Salvation and chosen the path of damnation, hell over heaven. Piss Christ is my doing, no one else's, and I have to take responsibility before God every second of my life and at the Hour of Judgement, however, therein is the irony of the piece and the inherent victory it contains!
In spite of what I have done in sinning--I and I alone in the abuse of my free will to chose sin over God's Love for me--Jesus is there, patient and waiting for me to come and ask His Forgiveness, even while "drowning" in the filth of whatever it was I did, and I know He will Forgive Me and restore me to Grace; Serrano provides for us a graphic image, a singular image for each follower of Christ, of how the King of Kings takes the filth of my individual sins and wears them Himself so I might become clean and enter His Kingdom of Heaven. This image, so despised by the media and most Christians, is a triumph of Love and God's devotion to us His Children, and testifies to how He willingly endures His Sorrowful Passion for each of us every moment of our lives.
Ultimately, Piss Christ is a triumph of Love for Christians, because it reminds us so graphically (as Mel Gibson's The Passion Of the Christ did) the Love that Jesus has which caused Him to Suffer and continues to Suffer for our sins so we can be cleansed, so, in this sense, we can call it a graphic message of Divine Mercy that Jesus really love us, really wants us to be forgiven for our sins and lovingly wants us to overcome our sins. Likewise, it shows us--which we all need to know--what sin is, the no-nonsense, graphic reality of what we do to ourselves and our Lord every time we commit the smallest sin. We should not be upset with Christians getting upset with Piss Christ, Christianity is so attacked in our culture and no one defends it, that the desecrating image of Our Lord troubles their heart, however, Jesus is willing to suffer this--as He suffered on the Cross--if it means saving us from our sins.
This is LOVE.
Eat Your Art Out,
The Fine Art Diner
Posted by The Fine Art Diner at 4:12:00 PM