A Separation: Sacrificing the Future

A Separation won the 2012 Academy Award for Best Foreign Language film, the first film from Iran to ever do so; in a time when Iran is in the news because of nuclear threats it's making to its neighbors, why would the Academy award a country with such a prestigious honor? Because A Separation blames America for all the ills and woes Iran is facing and director Asghar Farhadi does that with the traditional tool of art: symbols and conflict. By weaving a long, complicated web of blame, punishment and responsibility, the real culprit of the film is revealed: freedom. If people, especially women, didn't have so much freedom, then men wouldn't have so many problems; if all Muslims just followed the Koran better, the film tells us, everything would be fine. So why exactly does A Separation hate America so much? 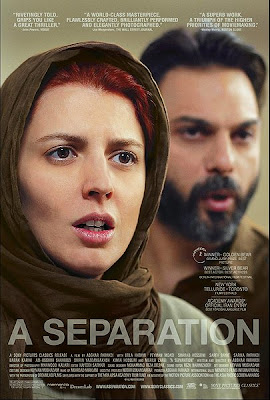 A Separation is really a play on our perceptions. When words are used to limit quantity, in this case, "a," we look for only one separation, the separation of Simin (Leila Hatami) from her husband Nader (Peyman Moadi) when in fact, the film is full of "separations," the most important being, the separation of the future from the past. Because there are so many separations within the structure of the film, separation permits the small lies, the fissures, the problems to creep in which propel the story and, ultimately, let it get out of control.
When Razieh, the hired housekeeper, crosses the street to get Grandfather, she gets hit by a car; even though we don't see this happening, we know that the future (the miscarried baby) has been sacrificed to preserve the past (Grandfather). Additionally what is important, is the lie told about how the child was lost: Razieh claims Nader hit her and the hit caused her miscarriage, because she keeps the car hitting her a secret until the very end. What does the vehicle hitting her symbolize?
Iran, while a republic and based on a constitution, also holds the government responsible for assuring that all its citizens have jobs and that their essential needs are provided for (socialism). Razieh's husband, Hodjat, does not know she took the job at Nader's (and tradition in the country says she should have told him about it but she didn't). Hodjat had been employed with a cobbler for ten years and then they fired him and told him to "just try and get justice" and he couldn't, so he was going to go and take care of Grandfather (Razieh didn't tell him she had been doing it, only that it was a job opening) but the day Hodjat was supposed to show up to start, Hodjat's creditors showed up and took him off to prison. We could say that the Iranian government's inability to live up to its promise of making sure the people have jobs is the vehicle causing Razieh's miscarriage because she wouldn't have been on the street if she wasn't working and she was working because her husband didn't have a job. But that's not where the film lays the blame for the tragedy of the lost child.
We can also say that, if things were better in Iran, Simin wouldn't have wanted to leave so desperately, and she would have stayed in her  home and taken care of Grandfather, instead of trying to leave and pass on the responsibility to someone else. During the opening scenes of the film, the divorce trial, the judge wants to know why Simin wants to leave the country but doesn't seem at all surprised that Simin wants to look for "a better life" (which was the title of another Oscar nominated film from Mexico this year). An interesting note about Iran: it's considered to be one of the 10 best places in the world for tourists, primarily because of all its history, but it's ranked 89th in the world because of public image and regional conflicts making it unsafe for tourists.
In conclusion, we can say A Separation is about the Iranian government separating itself  from the promises it makes to its citizens in the Iranian Constitution; the government's inability to provide for its people as it has said it would is like the dementia of Grandfather, because when Grandfather should be in the house, he's out on the street instead; when the Iranian government should be in "The House Of Islam," taking care of its problems within its own country, it's outside its borders, worrying itself about its neighbors (like America and Israel) instead, and this is why the Academy awarded A Separation the Oscar: the Iranian government, the Muslim men and the Koran allowing men to beat women are all absolved of any guilt in spite of their crimes; America, freedom and technology, however, are the culprits, the murderers of their cultural identity and the source of their problems. It's a very intense film so if you have the chance to view it, you might not like it, but it will be a great education in storytelling and dramatic build-up.
Eat Your Art Out,
The Fine Art Diner
Posted by The Fine Art Diner at 4:16:00 PM