Let It Grow: The Lorax

Is it promoted by Al Gore?
Is it pro-Democrat?
Is it,...gulp,... green?
We should probably say yes to all of the above, however, if we are Christians, we can consider this a pro-Christian film, too. Regardless of your view of global warming, the film does not do, say or sing anything contrary to common beliefs held by Christians. 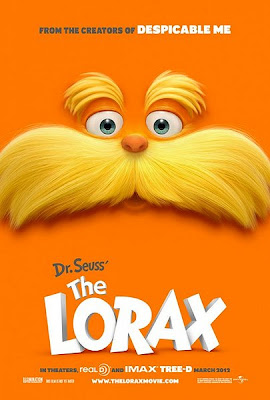 Dr. Seuss' The Lorax gives us a story of extremes: an extremely greedy and ambitious business man who uses all the trees to make some product that the consumers absolutely have to have in order to respect themselves. Does Christianity preach against greed? Absolutely. Does Christianity preach against ambition?  Christ said, do not follow ambition, but place yourself with the lowly.
The film gives us the extreme of social Darwinism, survival of the fittest, and an extreme view of the theory that the wealthy and upper classes drive the economy so they should be catered to. Anyone who does not practice their Christian faith, would see this as a piece of propaganda to overthrow business in favor of the environment. So what is the teaching of Christ on the environment? 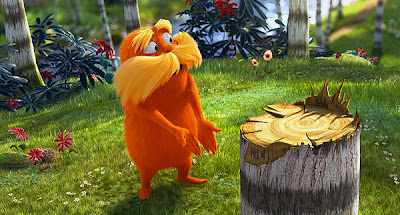 The earth was given to us for us to live in and use for all of our needs, but as with all gifts, we are required to be good stewards of what God has given us. If we don't take care of the earth, the earth can't take care of us. But this is where the Christian sub-tones come in: there are really only two trees in Christianity: there is the tree in the Garden of Eden, and there is the Tree of the Cross and I don't think it's an accident that the film has been released during Lent, when Christians all over the world are doing penance and particularly examining the interior life. It's not just the trees in nature that the film invokes, but the tree inside of us.
The bright tuffy-tops of the trees are used to make sweater-things, and we are faced with this dilemma in our own life: are we going to use the fruit of our Christian belief to be consumers of material goods, or to "let it grow," let our faith grow and spread like trees in a forest, and be consumer spiritual goods? One of the lines in the closing song, which invokes the favorite, "This Little Light Of Mine," is "You can't harvest what you don't sow," and for Christians, this is particularly true during Lent. 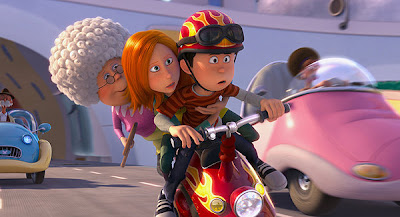 The artificial world created as a result of cutting down all the trees is really a logical result of what happens to us when we cut down the tree of the Cross within our soul: we cease to be the people God created us to be and become artificial because we follow society, not our Father. It's easy to see, in this world that doesn't follow Christ, the stumps in the forest as all those called to be Christians who do not heed the call, but by God's Grace, we have the seed of Life within us and we can spread that. I wouldn't hesitate to take my kids to see it and I hope you enjoy it!

Email ThisBlogThis!Share to TwitterShare to FacebookShare to Pinterest
Labels: The Lorax Christian review too green symbols what does it mean decoded is it a democrat film thefineartdiner
Newer Post Older Post Home