Here's the story line to Tim Burton's Frankenweenie: "When young Victor's pet dog Sparky (who stars in Victor's home-made monster movies) is hit by a car, Victor decides to bring him back to life the only way he knows how. But when the bolt-necked "monster" wreaks havoc and terror in the hearts of Victor's neighbors, he has to convince them (and his parents) that despite his appearance, Sparky's still the good loyal friend he's always been." 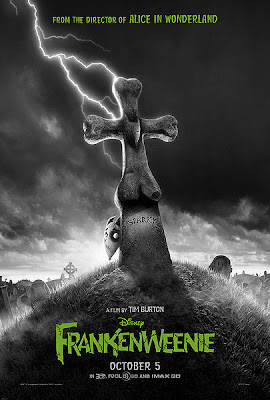 That reeks of Obama propaganda.
The attempts, like in The Vow, to bring back those old feelings that got Obama into the presidency because they have died must be a genuine fear in the liberal camp: despite the havoc and terror in the hearts of American voters, because of the artificial means used to sustain the dying economy, Obama is still the friend of the people (please see The Vow & Obamacare). Like in The Vow, it's a vehicle causing of the disaster the film focuses on, so we can deduce that the "vehicle" gaining speed in American politics has, indeed, killed Obama and his campaign is trying to bring him back to life. (The part where Sparky wags his tail and it falls off, may be a reference to the 1997 Dustin Hoffman political drama Wag the Dog).
On the other hand,...
Opening this weekend is Warner Brothers Project X and I think I will have to see it. I am not particularly looking forward to it, but I am hoping that it may be an undermining tool to Frankenweenie, that is, the Liberals have had their ultimate party, and now that the neighborhood is burning down, it's time that the adults come back and take charge:
You know the part where "my dad's car" gets driven into the swimming pool? Maybe that's a reference to the "tanked" auto industry and the "bail outs" (the car will have to be pulled out of the swimming pool).
It's very possible that the neighbor coming over threatening to call the police, and caught on camera punching "that little child in the face" are the Republicans who are threatening to bust up the party and are being held hostage by the liberal media who "shows only what they want to be seen" on videos and other social media.
The importance of Tim and Eric's Billion Dollar Movie is obvious in the tagline: "The greatest movie someone else's money could buy."
Here's the full story: "Two guys get a billion dollars to make a movie, only to watch their dream run off course. In order to make the money back, they then attempt to revitalize a failing shopping mall." Okay, who else was given a whole lotta money to make something work, it flopped, and now he's trying to do something else instead? This film could go either way, Democrat or Republican, but I am hoping that the insane number of a billion dollars to make a movie will mean that it's a Republican film talking about the waste the government has committed in trying to revitalize the economy like the mall they are trying to revitalize. It's scheduled for a March 2 opening.
I am getting my post up today on Gone (I got in the second screening and it was so worth it!) then this weekend I am seeing Project X, The Lorax and A Separation, the Iranian film which won the Oscar.
Posted by The Fine Art Diner at 11:42:00 AM