The Children of the Night: Dracula 1931

One of the most intriguing characters to ever come out of literature is Bram Stoker's Renfield; slightly shifting the focus from hero Jonathan Harker to the bug eating apostle of Dracula, director Tod Browning's 1931 classic Dracula highlights Renfield and, in 1931, there was a reason to. In this posting, I will explore the two characters of Renfield and Lucy Westerna, both in Bram Stoker's Dracula and Browning's film version. The character of Renfield varies only slightly, but Browning's telling interpretation of him leads audiences to a much better understanding of how he and Lucy are "the children of the night" and they are in each of us.
First, how does Dracula choose his victims?
In the novel, Stoker makes it clear that Dracula "may not enter anywhere at the first, unless there be some one of the household who bid him to come; though afterwards he can come as he pleases." This is imperative because it will help us to understand The Exorcist later on, but also, how Lucy and Renfield fall so easily to Dracula: they allow him to become the master of their house. The house is a symbol for the soul, for as the home houses the body so the body houses the soul, and inviting Dracula to enter is the same as allowing him to become the master of the soul. As Christ says, anyone who hears me knocking I shall enter and sup with him; for anyone who hears Dracula enter and opens the door to him, Dracula will sup on him. It's a very important distinction to make in how evil takes over us.
Renfield means "from the raven's field," and hence, is linked to death just as the raven symbolically is; since it also invokes a field, it also invokes Judas who was buried in the potter's field (and Renfield does, in his own way, betray Dracula). The great question is: why does Renfield eat bugs? We shouldn't be surprised, because we all do. In Stoker's Dracula, Dr. Seward records of Renfield in his journal:
My homicidal maniac is of a peculiar kind. I shall have to invent a new classification for him, and call him a zoophagous (life-eating) maniac; what he desires is to absorb as many lives as he can, and he has laid himself out to achieve it in a cumulative way. He gave many flies to one spider and many spiders to one bird, and then wanted a cat to eat the many birds. What would have been his later steps?
Renfield is a perverse reflection of ourselves desiring "things."
Renfield eats flies, then he eats spiders then he even eats a bird, raw. Renfield is consuming, and his consuming is analogous to us "consuming material products," but we don't see that anymore than Renfield sees that flies and spiders are gross and shouldn't be eaten; we see a shiny new car, we see a pile of money and the way our bills will be paid with that pile of money, we see the quality time we can have when we don't have to work so hard at our jobs but can enjoy the things we love instead... we see these things giving us "life," and that is our perversion, that they can't give us life, only God can. Renfield wanting to "absorb as many lives as he can" is--in all periods of history--the same as massive consumer demand for material goods and wealth.
In the Victorian era, consumption of material goods was at a high in Great Britain (for more on this topic, please see my post Leisure Hours & Victorian Consumption). This was the time that Stoker wrote Dracula; but when Browning resurrected Count Dracula and Renfield in 1931, it was the Great Depression in America and Browning shifting his focus from Jonathan Harker to Renfield may easily be interpreted as a condemnation of American consumption being the answer to Americans' problems: if I can just have things again, a man in a soup line might be saying to himself, I would be happy, I would be fulfilling life. Stoker and Browning both want to show us that wanting to consume material goods (so they will enhance our quality of life) is as disgusting and counter-productive as Renfield eating bugs.
My other favorite character in the canon of Dracula is Lucy Westenra. Lucy comes from the Latin word Lucius, "light."; in Browning's version, her last name is just "Western," but Stoker gives her the name "Westenra," "ra" invoking the sun (from Egyptian belief) and the West of course contrasting with Dracula's Eastern Europe. So Lucy represents the "Light of the West," and when she falls, so does all society.  But Stoker and Browning give us a back up: Mina's full name, Wilhemina, means "determined guardian," and she certainly lives up to it, not only guarding Jonathan, but covering the ranks to uphold the light of the west.
So why does Lucy fall?
The significant difference between Browning's and Stoker's portrayal is, in the novel, Lucy never formally meets Dracula: he summons her in her sleep and feeds off her that way, but there is no element of "formal society" (and that would certainly have been scandalous in Victorian Society). Her fiancee and Van Helsing all try to save her in a long battle, but she's lost and becomes a vampire. In Browning's version, she and Dracula meet at the theater and he comes to her room that night; she's dead the next day. In Dracula, Lucy writes to Mina and tells her of the three proposals of marriage she has had in one day: 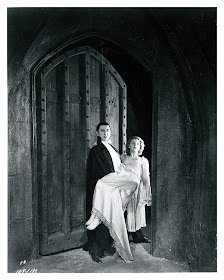 My dear Mina, why are men so noble when we woman are so little worthy of them? Here was I almost making fun of this great-hearted, true gentleman. I burst into tears--I am afraid, my dear, you will think this a very sloppy letter in more ways than one--and I really felt very badly. Why can't they let a girl marry three men, or as many as want her, and save all this trouble? But this is heresy, and I must not say it.
Lucy wants three husbands, just as Dracula has three brides.
In Stoker's novel, Renfield is a double for Harker, because Harker is chasing after a better position in his firm and material wealth as Renfield is chasing after bugs, so that's a temptation that men have; his second temptation comes from the wanton brides of Dracula trapping him and feeding off him, symbolic of men losing their virginity before marriage. For Mina, her dearest friend is Lucy and, therefore, a double for Mina: Lucy's appetites for sexual pleasure before marriage is what allows her to be "lead" because her "sleepwalking" is the sleep of her will, her higher and more disciplined self so she's easily led by her appetites. Lucy's stalking of small children means that a woman with those qualities does not make a good mother, taking the life of children rather than giving life to children.
That Lucy walks in the graveyard at night and is not dead, means that within Mina, that appetite is not dead, it has been transferred from being unfaithful before marriage to being unfaithful during marriage. As I posted in The Undead: Nosferatu, Mina has five men (including Van Helsing and Jonathan) who vow their love and protection to her and that signals that she's still battling the temptations, which is human; to overcome the temptations is divine because it requires the grace of the divine. Regarding Lucy, while Van Helsing and her fiancee Arthur were trying to save her, she had 4 transfusions.
Arthur tells Van Helsing that, after giving his blood to Lucy, he felt that they had been truly married; but four men give their blood to Lucy, so Van Helsing teases: "Said he not that the transfusion of his blood to her veins had made her truly his bride? . . . Then this so sweet maid is a polyandrist, and me, with my poor wife dead to me, but alive by Church's law, though no wits, all gone--even I, who am faithful husband to this now-no-wife, am bigamist" (a polyandrist is a woman who marries more than one man at a time; Van Helsing's English is broken and there is an important reason we will discuss later). This simple summary by Van Helsing (who we will be discussing at length later) is the reason why Lucy falls and "the light dies in the west," a woman's sexual appetites.
In Browning's version of Dracula, Lucy is almost as bad: she has just met Dracula at the theater for a few moments, and then, she and Mina in her dressing room, looking into her mirror, fantasizes about how romantic Dracula is and what his homeland in Transylvania must be like. Mina, mockingly imitating Dracula, bids Lucy good evening as his "Countess," suggesting that Lucy could marry Dracula after just one meeting, Lucy's fantasizing is so real to her. 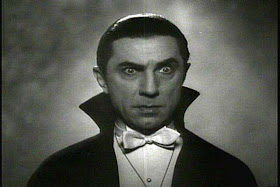 Renfield is a zoophagus and Lucy is a polyandrist; the labels are nice and comforting, but we shouldn't let them shelter the reality of them within us. The children of the night are Renfield and Lucy, but each of them is within us, howling for a greater and greater share of whatever it is we might want to fill our appetites (material wealth or sexual pleasure). Adapted once more, Dracula proves it is a powerful lesson of evil and all the forms it takes, and how evil takes us in with it.